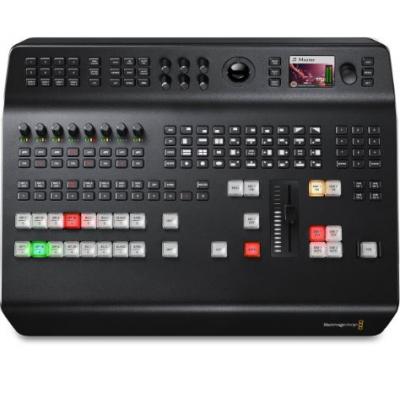 ATEM Television Studios are the first live production switchers designed for both broadcasters and AV professionals. There are 2 powerful HD models with 4 SDI and 4 HDMI inputs and a new Ultra HD model with 8 12G-SDI inputs. Packed with high end broadcast features ATEM Television Studio models feature re-sync on all inputs so you always get clean switching whether you’re using professional or consumer cameras. Plus you get multiview output so you can see all of your sources preview and program on a single screen aux out built in talkback 2 still stores an audio mixer camera control unit and more! ATEM Television Studio Pro models have the same features plus an integrated professional broadcast hardware control panel and additional CCU controls. Both models are perfect for live production episodic television web shows AV or even live coverage of video gaming competitions! Simply plug in your cameras game consoles or computers and start switching live!

12G-SDI for Ultra HD to 2160p60
The ATEM Television Studio Pro 4K features 8 standards converted 12G-SDI inputs so you can connect to both HD and Ultra HD sources. Each input also features a corresponding 12G-SDI output that can be used for camera return feeds with embedded control data and mix minus is available on each 12G‑SDI output.

Full Input Standards Conversion
Each 12G-SDI input features an independent Teranex low latency standards converter allowing inputs to be any combination of HD or Ultra HD television formats. The switcher will convert inputs to the switcher’s standard and combined with input re-sync this means you can simply plug in and it just works!

Turn any live event into a professional HD or Ultra HD television program!
ATEM Television Studio switchers are the fastest and most affordable way to create incredible programs immediately from live events! They are perfect for broadcasters professional sports concerts seminars or even the new emerging generation of web broadcasters using platforms such as YouTube Live Facebook Live and Twitch.tv. You can switch between multiple cameras game consoles and computers in real time all with broadcast quality transitions graphics and effects! Both models feature clean professional switching so there’s never a glitch when changing sources. That means you can even use it as a front end controller for your AV system and switch between multiple sources with the press of a button!

This item is not currently in stock or on order, and this item may be end of line.
Click here to search for similar items, or contact us quoting code Blackmagic Design BMD-SWATEMTVSTU/PRO4K (EOL).