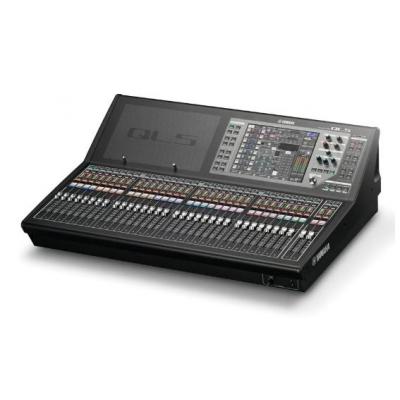 The Yamaha sound begins with reproduction that is faithful to the source. QL series consoles feature circuitry and components that have been designed and selected with the utmost care achieving outstanding audio purity from input to output. With that solid sonic foundation it becomes possible to take full advantage of built-in premium internal processors such as the Portico 5033/5043 created in cooperation with Rupert Neve to shape and create as required. For a wide range of speech applications built-in automatic mixing functionality from Dan Dugan Sound Design provides optimum channel balance while allowing the operator to concentrate fully on optimizing the overall sound.

The ability to respond swiftly and surely to multiple rapidly changing demands is essential for effective live sound support. QL series consoles feature large touch-panel displays as well as “Touch and Turn” knobs that make up a remarkably smooth efficient control interface. Attention has also been paid to details such as fader feel and channel name display visibility in order to deliver a sophisticated overall operating experience. Remote control and offline setup capability via an iPad or computer adds even more refinement to an already state-of-the-art operating environment.

Expandable All-in-One Support for Any Application

In addition to ample analog input and output capacity QL series consoles feature the same Dante audio networking protocol that provides broad connectivity in the CL consoles. There's also an innovative “Port to Port” feature that can patch any input port to any output port so the QL console can function as a remote I/O device for any other QL or CL series console for example. Other flexibility enhancing features such as 2-track and multitrack recording capability and dual MY expansion slots that allow processing capability or I/O to be added as required make the QL consoles suitable for use as central components in an extensive variety of sound applications.

32 + 2 fader configuration adapts to a wide range of channel layouts. The QL5 is a compact console with large-scale capabilities.